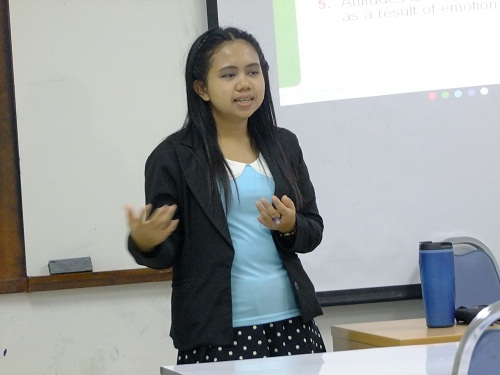 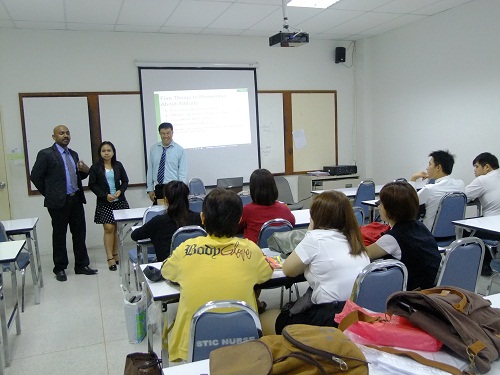 She said that she was happy to visit on homing-coming day, ( August 9),  to meet with STIC management, lecturers, staff and students.

She said that when she studied duringher first year as a freshman student in the Business English program,she was not really good at English. She began at starting from scratch, however, after that she had adjusted herself by using the dictionary as a manual/  handbook, 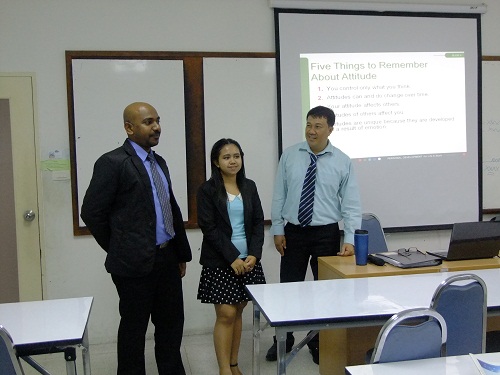 “At the beginning, I was very poor in English communication, and I could speak a little bit, not fluently as it should be, especially for writing in English,it was really very difficult, and got the low grades, but when I have come to study here, and then I have to carry on learning more about English,” she added.

She went on to add that she studies English by using the ‘fact sheets’ provided by the English teachers and then tries again and again  to remember more vocabulary words  so that she can get the most out of the lessons in the classroom. 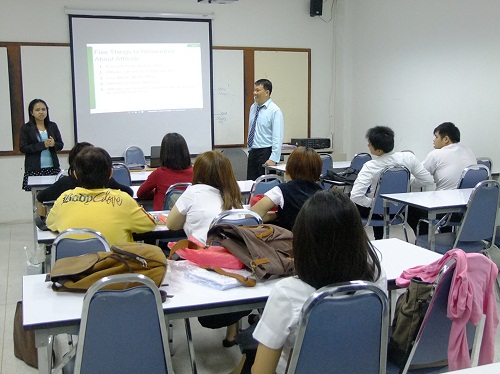 “I have got to know little by little for clear meanings so I could start next writing in English  for the Business English subject. Then, I could get to know more  and answer some questions due  to  my initial understanding,  like the vocabulary word, “Court”   what is the  meaning of  Court, and so on.

“Apart from that for ‘good’  English learner, this could be also done through watching the foreign English movie, listening the music  from radio, and tried to remember daily new English vocabularies day by day, so that I could apply for work in the near future,” she added. 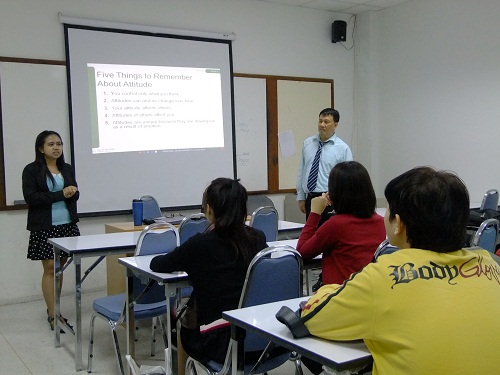 Khun Ann told the students in the classroom that learning from many things, like from Thai movies, foreign films,  and surroundings including places, locations, subway stations, government, and state enterprise offices.  “Reading more  English books, and listen the nice English music,  watching film like Harry Porter  as examples, and also  meeting and talking to foreign friends, is one of the best ways to learn.

One of the most important things,  is trying  to  speak clearly English accents,  so that the foreigners could understand yours  about  the meanings from  Thai people’s conversation.” 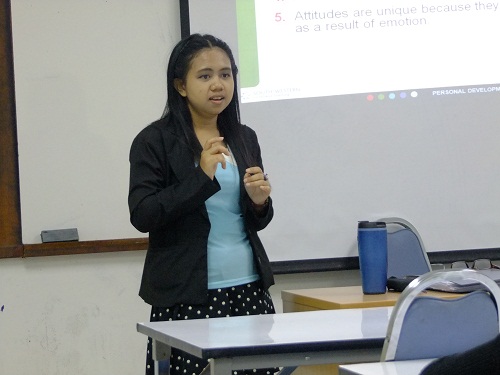 From the past experiences, it was found that there were a large number of students that had to leave the College to study at the other universities because they were  really poor at English. It was very difficult for them to learn English and  could not continue studying here,  noted  she who was also the Thepsirin School alumni.

Khun Ann said she was able to finish studying her course  in 3 years and a half  in 2009,  and during her study, she also had opportunity to work as an intern at the Embassy of Belgium. That was where she learned and got well prepared for her further work as a professional.

“With  basic knowledge in the field of Business English degree,  and then I would like to take an opportunity looking for the right  jobs,and I think this Business English major could be applied for more jobs at various working agencies,  like Embassy of Belgium where English language is used,

She  submitted her resume to the Embassy of Belgium for consideration and,   “I was  contacted by the  Embassy  for an interview with a political ambassador/ analysis just pick one for the internship there.”

“Lastly, it was finally announced that  they accepted me for the internship there which was a great opportunity for me to learn about English conversation with the foreigners  as well as got to know more about work and people, especially when I was appointed as a secretary of the British Club,” she continued.

Moreover, she remarked that her experiences at the St Theresa International College,  Embassy of Belgium, and British Club, have opened up a lot of career opportunities for her that would otherwise have been unavailable.

“ When we work  (as an intern)  anywhere,   please don’t miss, ignore  or  disappear from work,  you should have to present your old work to the new ones , so that they could learn and continue immediately their work which is an important thing, “