St Theresa International College is situated in the very peaceful province of Nakhon Nayok. The province is just right for family outings and relaxation, and is not too far away from the bustling city of Bangkok.

It has many interesting and amazing attractions ranging from making merits at a Buddhist temples, relaxing and meditating in Buddhist Parks, and peaceful walks by the flora and fauna, to adventurous treks and rafting near gorgeous waterfalls. For history enthusiasts, you may want to check out the Preservation and Study Center of Chai Pattana Foundation (H.M. the King’s Royal Project) and the Royal Military Academy History Museum. 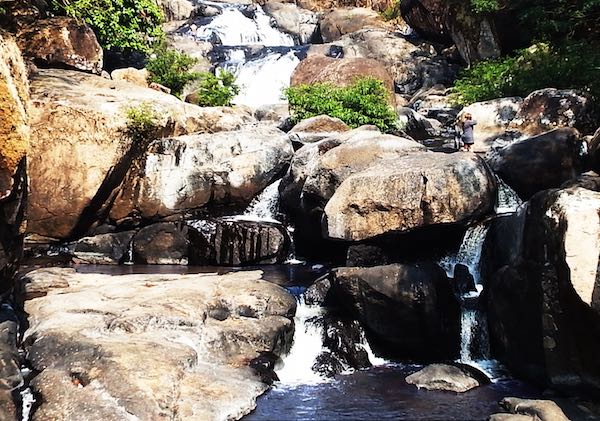 Sarika Waterfalls
The Sarika waterfalls are located on the way to Khao Yai National Park area and are approximately 12 km from Nakhon Nayok town. You will need to enter Highway No. 3050 and drive a further 3km until you reach to the waterfall area. Nearby to Sarika waterfalls, you can also find the beautiful Wang Trakrai and Nang Rong waterfalls.

Sarika Waterfalls has 9 waterfall drops and is roughly 200 meters high up a mountain cliff. At each drop, there are numerous ponds of cool clear water. Adjacent to the waterfalls, you can find public restrooms, food stalls, and souvenir shops. The admission fee is 20 baht per adult and 10 baht per child.

The waterfalls are privately owned by the Phanthip Boriphat family and are located in a beautifully landscaped natural park. The surrounding tropical flowers and greenery makes the park an ideal destination for adventurous sportsters. You will find numerous athletes jogging across the park’s whitewater streams.

Visitors can travel to Wang Trakrai as a day tour or to stay overnight in the available bungalows for rent. Many restaurants and food stalls are also available around the park area. Walk-in admission fee is 20 Thai baht per person.

Narong Waterfall
The Narong Waterfall is located on Highway 3049, which is about 20 kilometers from Nakhon Nayok town. It is a medium-sized waterfall that is situated in Khao Yai National Park. Numerous guesthouses are available to those who wish to stay overnight. Admission fee is 5 baht per person.

The Khun Dan Prakarnchol Dam is a photographer’s paradise. It is one of the longest dams in the world built with soil and concrete. The best time to visit the Dam is during the late afternoon where you can have a spectacular view of the sunset.

On the top of the dam, visitors can see the distant lush greenery of Khao Yai National Park. Tourists can hire long-tailed boats for sailing across the reservoir towards other numerous nearby waterfalls.

Chulachomklao Royal Military Academy is situated on Suwannasorn road in Tambon Phromanee, Muang District. Located on 3,000 rai of land, near Khao Cha Ngok Mountain, it is an educational institute for military cadets of the Royal Thai Army.

There is a historical war museum on campus and is opened to the public from Monday to Friday between 8.30 a.m. and 4.30 p.m. The exhibitions display historical artifacts and statues of King Rama V. Chulachomklao who was the founder of the Academy. The admission fee is 10 baht per person. 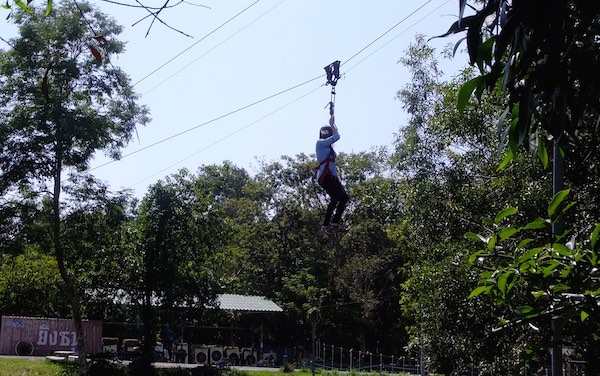 Near the Military Academy campus, stands the Khun Dan Warrior’s shrine. It is a sacred and well respected area. According to legend, Khun Dan was head of the Customhouse in Nakhon Nayok during the Ayuthaya regime. His courageous battle against the Khmer defectors in 1587 was recorded and praised throughout the nation. He was able to successfully drive the Khmer invaders out of the country during the time when King Naresuan Maharaj and his troops were fighting against the Burmese.

Maga Puja Anusorn Buddhist Park is a short drive from Ganesh Temple Park and is situated along the main road that leads to Sarika waterfalls. The beautiful park was built to commemorate the 2600 years anniversary of Buddhism. This is a landmark upon Buddhist history aimed at indulging students or the general public in an atmosphere similar to 2500 years ago (BE).

Total land area of the Park is 53 rai and is surrounded by mountains with a beautiful flowing river. A large statue of Buddha can be seen in the middle of the park and it depicts Buddha giving a sermon on Buddhism’s holy Makha Bucha Day. The overall collection of 1,250 monk statues in the park represents the gathering of monks who came from distant lands just to listen to sermon of Lord Buddha during Makha Bucha Day. 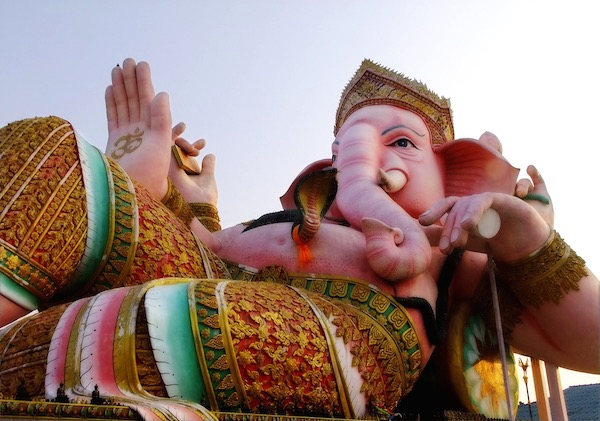 The Ganesh Temple Park is a famous temple where local folks frequently visit and ask for blessings from Lord Ganesh. There are two spectacular statues of the Hindu God that visitors should not miss. The statue of Lord Ganesh in a blessing position is said to be very sacred and paranormal. It is believed that after making prayers, you should walk 3 times around the statue in order for your wishes would be granted in the near future.

At the front entrance of the temple park, stands the 100 years old statue of Lord Ganesh, which is believed to be very sacred and holy. Many people pay their respects by pouring scented water over the statue as an offer for blessings.