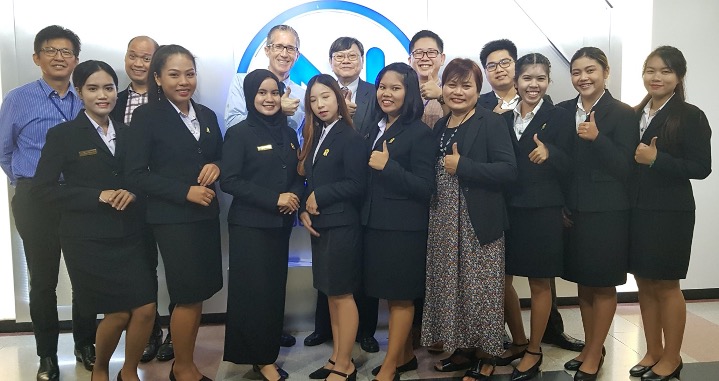 On 19 September 2019, the fourth year Business English students went to an observation tour at the Nation news building. NBC (Nation Broadcasting Corporation) or Nation TV is a television station that offers news programs that focus on economic news, current economic situation analysis and news updates. This is the first TV station in Thailand that broadcasts news for 24 hours. Channel 22 broadcasts on television, on their website Nation22.com, and on Facebook. The channel hosts many programs such as Kom Chat Luek, NATION BIZ INSIGHT, Newsroom and so on.  In March 2019, Nation TV has moved up to rank 10 from rank 14 because of the good ratings of digital TV and its popularity with viewers. On this study trip, we listened to the history of Nation TV 22 and learned their working style both in the foreground and behind the scenes of the news program. This is a wonderful learning experience for those who are interested in the media. Moreover, Nation TV gives an opportunity for everyone who is a journalist to conduct news reporting not only in Bangkok but other provinces too. For students who are interested in becoming a journalist or working in the media, Nation TV welcomes interns with open arms.